What Does MB Mean?

MB is often used to refer to the Indian music company "MB Music" and to the American boy band "Mindless Behavior." It is also an abbreviation used with the meanings "My Bad," "Maybe," and "Megabyte." Here is a little more information about each of these definitions of MB. (Examples of the use of MB can be found below.)

Mindless Behavior was an American boy band, widely known by the initials "MB." The band was formed in 2008 and disbanded in 2017. MB are best known for the singles "My Girl" and "Mrs. Right."

The abbreviation MB is widely used in text messaging and on social media with the meaning "My Bad." In this context, MB is a slang term used as an admission on the part of the sender that they have made a mistake.

MB is also used as a straightforward contraction of the word "Maybe."

In computing, when typed in capital letters, the abbreviation MB most commonly means "megabyte." In this context, a MB is a measure of information storage capacity on a computer. A MB is equal to 1,000 kilobytes and precedes the gigabyte unit of measurement.

Although a MB is technically 1,000,000 bytes, the term is often used synonymously with mebibytes, which contain 1,048,576 bytes. In everyday speech and writing, megabyte is often abbreviated as "meg".

When typed as Mb, the same abbreviation means megabit. One megabyte is equal to eight megabits.

When I write MB, I mean this: 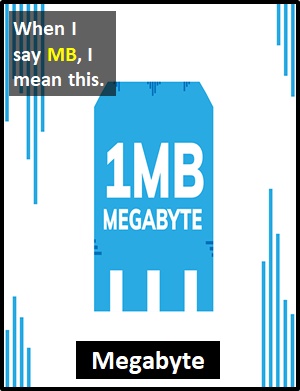 "Mindless Behavior" is another common definition for MB.

"My Bad" is another definition for MB, especially in text messaging and on social media.

"Megabyte" is the most common definition for MB in computing.

Examples of MB in Sentences

Here are examples of MB being used in conversations:

An Academic Look at MB

MB is usually classified as an initialism abbreviation, as it is pronounced using its individual letters (i.e., "Emm Bee"). Initialisms are different to acronyms, which are spoken like words.

Before the digital era, we might have said something like "sorry" or "excuse me," instead of using MB to mean "My Bad."

Example of MB Used in a Text