What Does NAGI Mean?

NAGI means "Not A Good Idea."

The abbreviation NAGI is an acronym typically used with the meaning "Not A Good Idea," as a polite way of rejecting a proposal or suggestion.

NAGI can also be used when reflecting on an earlier decision that hasn't worked out as expected.

When I write NAGI, I mean this: 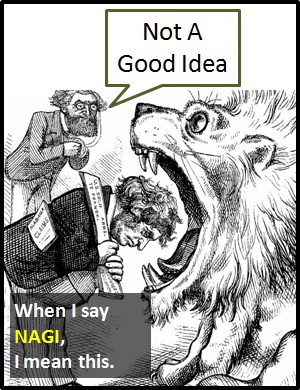 Sometimes it's obvious when something is NAGI.

Examples of NAGI in Sentences

Here are examples of NAGI being used in conversations:

An Academic Look at NAGI

NAGI is an acronym (i.e., an abbreviation spoken like a word). Acronyms differ from initialism abbreviations, which are pronounced using their individual letters.

Before the digital era, we might have just said "Not A Good Idea," or something like "It Might Be Better Not To Do That" instead of using NAGI.

Example of NAGI Used in a Text

NAGI
Help Us To Improve Cyber Definitions
Please tell us using this form.