What Does NEI Mean?

NEI means "Not Enough Information." The abbreviation NEI is used to indicate that the sender wants more detail about something that has been mentioned. NEI may be used because the sender wishes to clarify a point. However, in the context of gossip, it usually means they are being nosey.

When I write NEI, I mean this: 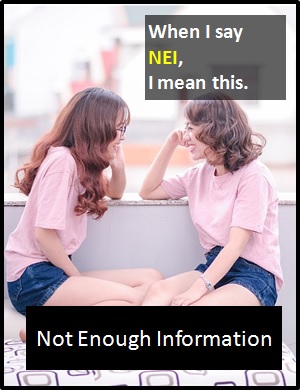 NEI is most often used in gossip.

Here are examples of NEI being used in conversations:

An Academic Look at NEI

As it is pronounced using its individual letters (i.e., "Enn Ee Eye"), NEI is classified as an initialism abbreviation. Initialisms are different to acronyms, which are spoken like words.

NEI is typically used as a standalone declarative sentence (i.e., a statement). It is not normally used as another part of speech within a wider sentence.

Before the digital era, we might have said something like "Tell me more" or "What else?" instead of using the abbreviation NEI.

Example of NEI Used in a Text