What Does NF Mean?

The initials NF are the stage name of American rapper Nathan John Feuerstein. NF is also an abbreviation meaning "Not Funny."

Nathan John Feuerstein is an award-winning American rapper, singer and songwriter, known by his initials NF (stylized as ИF). NF has been labelled as a Christian rapper. However, he refuses to accept that label, claiming that he strives to connect with people with diverse points of view.

"The Search" is a song by NF, released in 2019, as the second single from the album of the same name. The song discusses the negative impact of fame and commercial success on NF's mental and physical wellbeing.

The abbreviation NF is widely used with the meaning "Not Funny." In this context, it is typically used in response to a joke or comment. NF can be used literally, when it indicates that the sender genuinely does not find something amusing. However, it can also be used ironically, usually when the sender is the source of the amusement, but sees the humor in the situation.

When I write NF, I mean this: 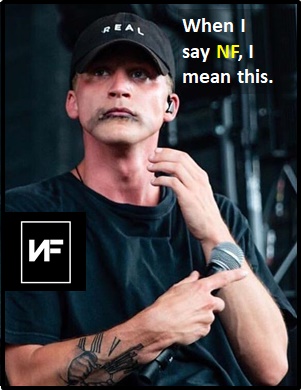 "Not Funny" is another common definition for NF.

Examples of NF in Sentences

Here are examples of NF being used in conversations with the meaning "Not Funny":

An Academic Look at NF

NF is an initialism abbreviation. This means it is pronounced using its individual letters (i.e., "Enn Eff"). Initialisms are different to acronyms, which are spoken like words.

Before the digital era, we might have just said "Not Funny," instead of using the abbreviation NF to express a lack of amusement.

Example of NF Used in a Text

LOLN (Lol, Not) NFAA (Not Funny At All) SNF (So Not Funny) TNF (That's Not Funny) Using the music symbols