LOLN means "Laughing Out Loud, Not!"

The abbreviation LOLN is typically used to indicate that the sender does not find something funny. It is also used to contradict another person who finds a joke or situation funny.

The use of "Not!" in LOLN was inspired by the 1992 film Wayne's World. In the film, the main characters (Wayne y Garth) follow many apparently affirmative sentences with "Not!", thereby completely changing the meaning. These "Not jokes" became a standard part of the routines of US stand-up comics in the 1990s, and the phrase became so widespread that the use of "Not!" as a contradiction has become a feature of contemporary English. (Although it is now widely considered 'uncool.')

When I write LOLN, I mean this: 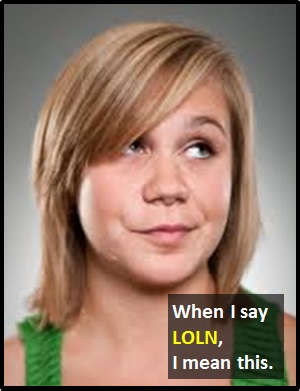 Examples of LOLN in Sentences

Here are examples of LOLN being used in conversations:

An Academic Look at LOLN

LOLN is an initialism abbreviation. This means it is pronounced using its individual letters (i.e., El Oh El En). Initialisms contrast with acronyms, which are spoken like words.

Before the digital era, we might have said something like "Not funny" instead of using the abbreviation LOLN.

The Evolution of "LOL"

This video shows the evolution of the term "LOL" and the various laughing emojis: Read more about LOL.

Example of LOLN Used in a Text