What Does NITTY-GRITTY Mean?

NITTY-GRITTY means "The Specific Facts or Details." It is also part of the name of "The Nitty Gritty Dirt Band."

The phrase NITTY-GRITTY is an idiom which means "the Specific Facts or Details." It is argued that the expression has connections with the slave trade, as it may have originally referred to the detritus found in the bottom of a boat after a shipment of slaves had been removed from the hold and, by extension, to the slaves themselves.

Although the connection of NITTY-GRITTY to the slave trade is widely disputed, since at least 2002, police forces in the United Kingdom have banned officers from using the phrase. Also, in 2020, UK broadcaster Sky Sports included NITYY-GRITTY in a list of words and phrases associated with slavery which commentators were reportedly to be banned from saying on air. In 2021, despite this apparent widespread acceptance of the possible origins of the phrase and its potential to cause offense, the BBC television channel in the UK rejected a complaint against political editor Laura Kuenssberg, who used NITTY-GRITTY during a podcast.

"The Specific Facts or Details" is the most common definition for NITTY-GRITTY on Snapchat, WhatsApp, Facebook, Twitter, and Instagram. Here is some more information about NITTY-GRITTY.

NITTY GRITTY is also part of the name of the "Nitty Gritty Dirt Band."

When I write NITTY-GRITTY, I mean this: 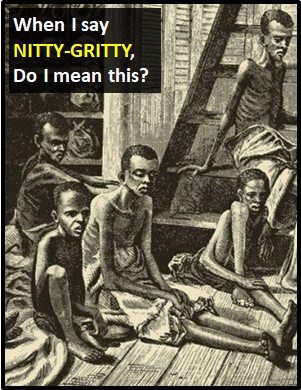 NITTY-GRITTY means "The Specific Facts or Details," but its origins may be controversial.

Examples of NITTY-GRITTY in Sentences

Here are examples of NITTY-GRITTY being used in conversations, with the meaning "The Specific Facts or Details":

An Academic Look at NITTY-GRITTY

"NITTY GRITTY" is an idiom; i.e., a commonly used expression whose meaning does not relate to the literal meaning of its words. Here are some other common idioms:

Example of NITTY-GRITTY Used in a Text

NITTY-GRITTY
Help Us To Improve Cyber Definitions
Please tell us using this form.