What Does OBVI Mean?

The abbreviation OBVI is a contraction of the word "Obviously." It is typically used as a single word reply to a statement or a question that doesn't need a detailed response because the answer is so apparent.

When I write OBVI, I mean this: 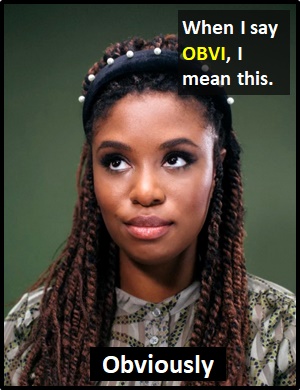 OBVI is an obvious contraction of the word "Obviously."

Examples of OBVI in Sentences

Here are examples of OBVI being used in conversations:

An Academic Look at OBVI

OBVI is a shortened version of the word "Obviously." Therefore it is a contraction. Contractions tend to be formed in one of three ways: For reasons of brevity, contractions are rarely followed by periods/full stops, and apostrophes are routinely omitted.

Example of OBVI Used in a Text