What Does OPEC Mean?

The Organization of the Petroleum Exporting Countries (OPEC) is a group of 13 oil-exporting countries, mainly from the Middle East and North Africa. It was formed in 1960.

OPEC's stated objective is: "to co-ordinate and unify petroleum policies among Member Countries, in order to secure fair and stable prices for petroleum producers; an efficient, economic and regular supply of petroleum to consuming nations; and a fair return on capital to those investing in the industry."

OPEC nations produce about 30% of the world's crude oil. The biggest single oil producer within OPEC is Saudi Arabia.

In 2016, OPEC joined forces with 10 other oil producing countries to form OPEC+.

When I write OPEC, I mean this: 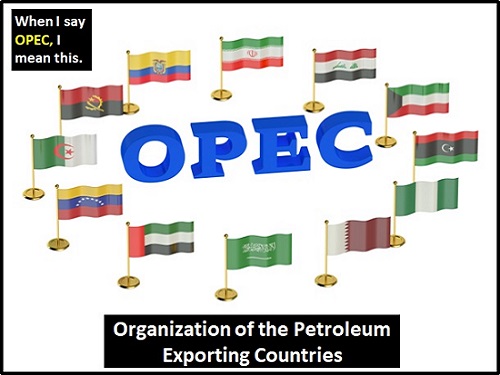 OPEC is a group of 13 oil-exporting countries.

An Academic Look at OPEC

OPEC is classified as an acronym (i.e., an abbreviation spoken like a word).

Acronyms differ from initialism abbreviations, which are pronounced using their individual letters.

The use of OPEC to mean "Organization of the Petroleum Exporting Countries" pre-dates the digital era.

Example of OPEC Used in a Text