What Does PENG Mean?

PENG is a slang term used to refer to a person (of any gender) or object that is particularly sexy, attractive or desirable.

PENG is thought to be derived from the Jamaican slang word "Kushempeng." It is a slightly less exaggerated version of the term LENG.

PENG and LENG can be combined into the phrase PENG A LENG, which is used to express extreme desirability!

When I write PENG, I mean this: 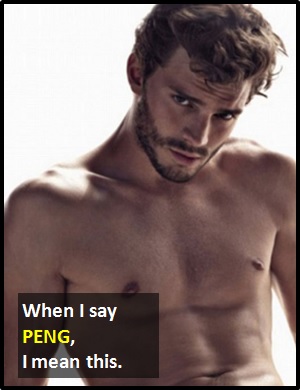 This guy is definitely PENG.

Examples of PENG in Sentences

Here are examples of PENG being used in conversations:

An Academic Look at PENG

PENG is a slang word, thought to derive from the Jamaican slang word "Kushempeng." Slang refers to words, phrases and uses of language that are regarded as very informal and which are often restricted to a special context or a particular group of users.

PENG is typically used as an adjective (i.e., a word that describes a noun). For example:

Before the digital era, we might have said "Sexy or Attractive" or "Exceptional or Awesome" instead of using PENG.

Example of PENG Used in a Text