PLEB means "Low-Class or Common person." The term PLEB is short for Plebeian. The Plebeians were the general body of free Roman citizens who had no right to vote. Plebeian may have first been shortened to PLEB by English public school pupils in the 18th century, when it was used as a derogatory term for pupils of lower social classes.

In modern usage, PLEB is often used as an insult to imply that someone lacks intelligence, is unsophisticated or of low social standing. In online gaming circles, PLEB is used as a derogatory term for inexperienced gamers, or a player who does not have the latest version of a game or gaming equipment.

Of note, PLEBS was the title of a popular UK television series which ran from 2013 to 2016.

When I write PLEB, I mean this: 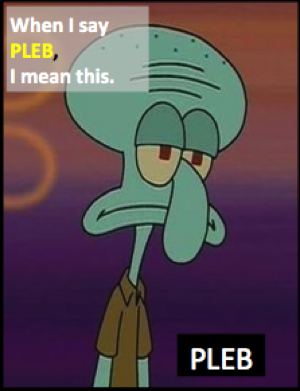 PLEB is often used to imply that someone is unsophisticated.

Examples of PLEB in Sentences

Here are examples of PLEB being used in conversations:

An Academic Look at PLEB

PLEB is a shortened version of plebeian and is therefore a contraction. Contractions tend to be formed in one of three ways: For reasons of brevity, contractions are rarely followed by periods/full stops and apostrophes are routinely omitted in text speak and on social-media platforms.

Example of PLEB Used in a Text

BAKA (Idiot) BERK (Idiot (from Berkeley Hunt which is rhyming slang for c**t)) CHOPPER (Idiot (as in "Don't be a chopper.")) DOUCHE (Idiot) GOM (Idiot (from "gormless")) JERK (Idiot)