What Does PONR Mean?

PONR is also used in many other contexts. For example, an investment in a project can reach a PONR. "I have reached a PONR" effectively means "I am now fully committed."

When I write PONR, I mean this: 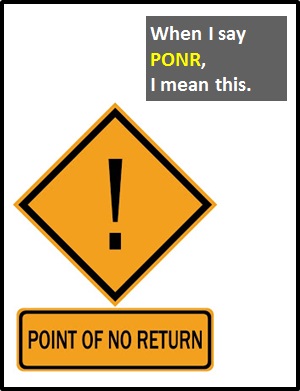 The image shows a sign indicating the point of no return.

Examples of PONR in Sentences

Here is an example of PONR being used in a conversation:

An Academic Look at PONR

PONR is typically used as a noun (i.e., a naming word). For example: When PONR is expanded, it is a noun phrase based on the common noun Point. The remainder of the words are a prepositional phrase that modify Point.

Of note, PONR is an initialism abbreviation. This means it is pronounced using its individual letters (i.e., Pee Oh En Ar). (Initialisms contrast with acronyms, which are spoken like words.)

Before the digital era, we might have said something like "there's no going back from here" instead of PONR.

Example of PONR Used in a Text