What Does PWND Mean?

PWND means "Owned." The PWND is typically used after losing badly during an online game (e.g., I was really PWND, man.) When one player completely annihilates another, the loser is said to have been PWND (i.e., owned, beaten, defeated).

The term PWND almost certainly derived from a typing error of OWNED as P and O are next to each other a standard keyboard. The 3 simply represents an E. (NB: 3 is a common substitute for E in cyber speak.)

PWND is not always about losing or related to online gaming. For example:

When I write PWND, I mean this: 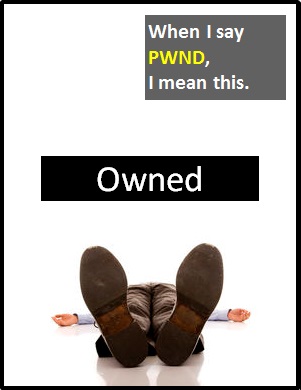 Examples of PWND in Sentences

Here are examples of PWND being used in conversations:

An Academic Look at PWND

PWND is the past tense of "to own" (i.e., owned). "Pawned" and "poned" are the most popular pronunciations.

Before the digital era, we might have said something like "thrashed" or "squarely beaten" instead of PWND.

Example of PWND Used in a Text