What Does PWNT Mean?

PWNT means "Owned." The term PWNT (owned) means dominated, defeated, or controlled. It almost certainly has its roots in a typographical error of OWNED, which was probably written PWNED (as P is adjacent to O on the keyboard). Since then, the ED ending of PWNED has adopted several forms including PWNT, PWN3D and PWND.

All of these terms are commonly used in the context of online war games.

PWNT means "Owned" (which is a neologism for dominated, controlled, or defeated). This is the most common definition for PWNT on Snapchat, WhatsApp, Facebook, Instagram, TikTok, and Twitter.

When I write PWNT, I mean this: 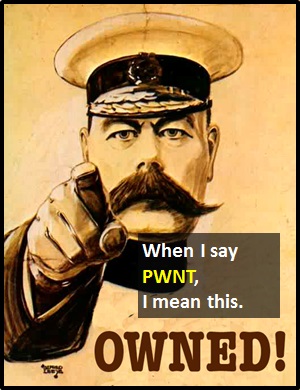 Examples of PWNT in Sentences

Here are examples of PWNT being used in conversations:

An Academic Look at PWNT

PWNT is used as a verb in the past tense or a past participle (i.e., it is like owned).

Before the digital era, we might have said something like "dominated," "thrashed," or "defeated" instead of PWNT.

Example of PWNT Used in a Text

PWNT
Help Us To Improve Cyber Definitions
Please tell us using this form.