What Does QI Mean?

QI means "Quite Interesting." Of note, when QI is expanded, the word "quite" can carry different weights ranging from "not very" to "very." It all depends on tone and context.

QI also commonly refers to the TV show "QI" on BBC2 (which also means "Quite Interesting"). It is a quiz show in which contestants do not necessarily score points for correct answers but for interesting or funny ones. QI's presenters have been Stephen Fry and Sandi Toksvig.

Also of note, Qi (pronounced chee) is the term given to the circulating life force whose existence and properties are the basis of much Chinese philosophy and medicine.

When I write QI, I mean this: 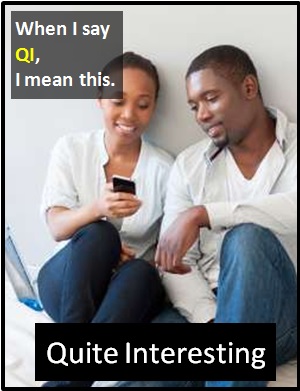 QI most commonly means Quite Interesting.

Examples of QI in Sentences

Here are examples of QI being used in conversations:

An Academic Look at QI

QI is an initialism abbreviation. This means its letters a pronounced individually.

Example of QI Used in a Text