RBTL means "Read Between The Lines."

The phrase "Read Between The Lines" means to detect or deduce a meaning from something that has been written that is not obvious from a cursory examination of the text. The abbreviation RBTL is typically used in text-based messaging to direct someone to think about what has been written, said or done, in order to properly understand a situation.

When I write RBTL, I mean this: 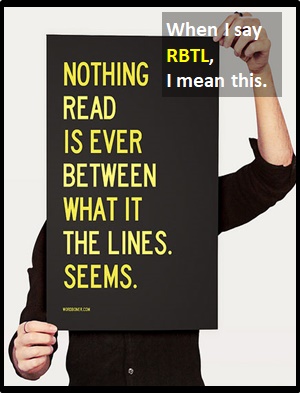 "Read Between The Lines" to find the true meaning.

Examples of RBTL in Sentences

Here are examples of RBTL being used in conversations:

An Academic Look at RBTL

Before the digital era, we would have just said "Read Between The Lines" instead of using the abbreviation RBTL.

Example of RBTL Used in a Text