What Does SK8 Mean?

SK8 means "Skate," but more specifically the sport of skateboarding. Although used by the skating community initially, the term SK8 became more main stream when singer Avril Lavigne released a single from her 2002 album "Let Go" entitled "Sk8er Boi," which spoke of a romance between a girl and a boy who skateboarded.

On the dating section of Craigslist (American classified advertising website), SK8 is used to describe someone as "drug and disease free" and carries a connotation of generosity and kindness. It is unknown where this meaning derives.

When I write SK8, I mean this: 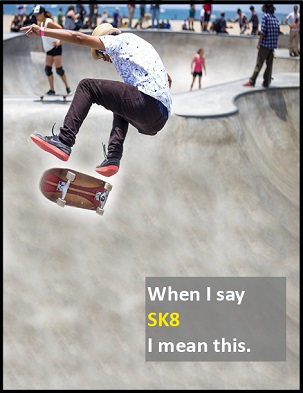 Examples of SK8 in Sentences

Here are examples of SK8 being used in conversations:

An Academic Look at SK8

SK8 is defined as a cyber term because some of its characters are used as substitutes for letters. Most cyber terms were introduced to reduce the number of key strokes required to write the word, but since the arrival of predictive texting and keyboards on mobile devices, this efficiency is no longer required. Nevertheless, cyber terms are still regularly used to make messages more entertaining or to express individuality. Cyber terms differ from icons because they are not pictorial representations. SK8 is used as a verb (a doing word) and an adjective (a describing word). For example:

Before the digital era, we would have just said "skate" instead of SK8.

Example of SK8 Used in a Text