What Does SMG Mean?

The abbreviation SMG is used in military and gaming circles with the meaning "Sub-Machine Gun." In this context, an SMG is a magazine-fed, automatic weapon.

In the military, SMGs have largely been replaced by assault rifles, though some are still used by special forces and police SWAT teams.

SMG also stands for "Social Media Ghost." In this context, an SMG is a person who either does not have any social media accounts or who has accounts, but does not post or otherwise participate.

When I write SMG, I mean this: 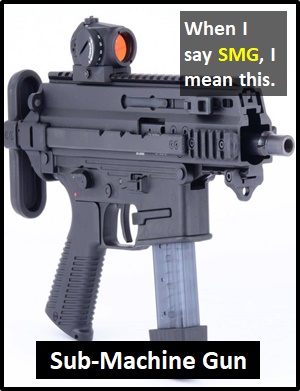 "Sub-Machine Gun" is the most common definition for SMG on on gaming apps, such as Discord, TeamSpeak and Telegram.

"Social Media Ghost" is another common definition for SMG.

Examples of SMG in Sentences

Here are examples of SMG being used in conversations:

An Academic Look at SMG

Whether used with the meaning "Sub-Machine Gun" or "Social Media Ghost," SMG is classified as an initialism abbreviation, as it is pronounced using its individual letters (i.e., "Ess Emm Gee"). Initialisms are different to acronyms, which are spoken like words.

Example of SMG Used in a Text