What Does SNAG Mean?

The abbreviation SNAG is used with the meaning "Sensitive New Age Guy" to describe a man who emphasizes his caring, sensitive qualities over those characteristics that are typically considered more masculine. SNAG is often used as a joking insult between men, but is also often employed as a pejorative term by people who consider themselves "anti-PC" to refer to any man who expresses socially liberal views.


Jackson Whalan with an amusing take on SNAGs.

Of note, in Australia, the word "snag" is a slang term for a sausage.

When I write SNAG, I mean this: 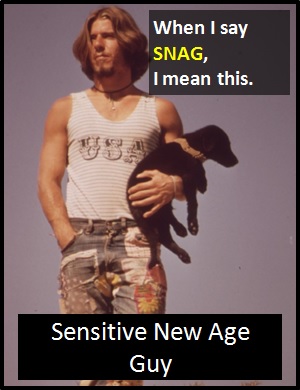 Examples of SNAG in Sentences

Here are examples of SNAG being used in conversations:

An Academic Look at SNAG

SNAG is an acronym (i.e., an abbreviation spoken like a word). Acronyms differ from initialism abbreviations, which are pronounced using their individual letters.

Before the digital era, we might have just said "Sensitive New Age Guy" instead of using the acronym SNAG.

Example of SNAG Used in a Text