What Does SPAG Mean?

SPAG is an Italian-American slang term used to refer to people of Latin-American descent. In this context, SPAG is an acronym based on the Italian word "Spagnolo," which is Italian for "Spanish."

In this context, SPAG is typically used as a light-hearted reprimand by older people who are not comfortable with the complete disregard for "Spelling, Punctuation And Grammar" usually displayed by younger people when using text-based communications.

Of note, SPAG is often used as a contraction of the word "Spaghetti" to refer to any pasta, particularly Spaghetti Bolognese, which is often contracted to "Spag Bol."

When I write SPAG, I mean this: 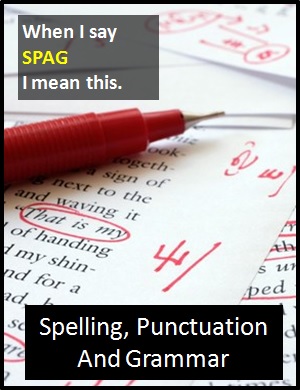 Examples of SPAG in Sentences

Here are examples of SPAG being used in conversations:

An Academic Look at SPAG

Whether used with the meaning "Spanish" or "Spelling, Punctuation And Grammar," SPAG is an acronym (i.e., an abbreviation spoken like a word). Acronyms differ from initialism abbreviations, which are pronounced using their individual letters.

Before the digital era, we would have just said "Spanish" or "Spelling, Punctuation And Grammar" instead of using SPAG.

Example of SPAG Used in a Text