What Does S^ Mean?

S^ means "What's Up?". The cyber term S^ is pronounced as a word, based on the sibilant sound (i.e., hissing noise) of the letter 'S' and the upward pointing symbol.

S^ is a way of asking "What's Up?" (i.e., "What's happening?" or "How are things with you?"). The phrase "What's Up?" is widely used as a greeting and gave rise to the messaging app WhatsApp.

"What's Up?" is the title of a song by American rock group 4 Non Blondes. It was released as a single in 1993, and was a hit in the US and across Europe. 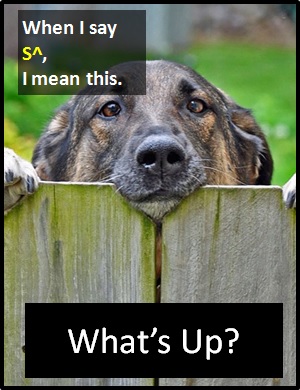 Examples of S^ in Sentences

Here are examples of S^ being used in conversations:

An Academic Look at S^

S^ is defined as a cyber term because some of its characters are used as substitutes for letters. Most cyber terms were introduced to reduce the number of key strokes required to write the word, but since the arrival of predictive texting and keyboards on mobile devices, this efficiency is no longer required.

S^ is a contraction of the interrogative sentence "What Is Up?". It commonly stands alone and is not usually followed by a question mark.

Before the digital era, we might have said something like "What's wrong?", "What's happening?" or "Hello" instead of using S^.

Example of S^ Used in a Text