What Does SUP Mean?

The acronym SUP is most commonly used in text messaging as an abbreviation of the phrase "What's up?", which is widely used with the meaning "What's new?" or "How are you?".

Even though it is a question, SUP is typically used as a greeting (i.e., a way of saying hello). When used in this way, it can also be answered with SUP. For example:

(Neither John nor Tony expects an answer. SUP is similar in meaning to "Alright?", which is another question that often just means hello.)

SUP is now widely used with the meaning "Stand-Up Paddleboarding" to refer to the outdoor water-sports activity in which a rider stands up on a large board and uses a paddle to move through the water.

SUP is also a contraction of the word "Support." In this context, it is particularly common in the online game "League of Legends."

SUP can also mean "Drink," especially in the north of England. For example:

When I write SUP, I mean this: 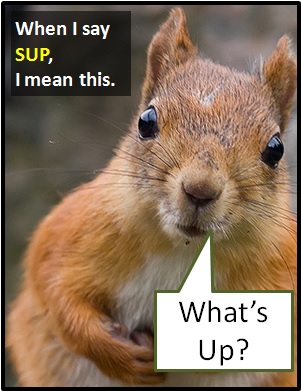 Here's a short video explaining how SUP is used:

"Stand-Up Paddleboarding" is another common definition for SUP.

"Support" is another definition for SUP.

"Drink" is another definition for SUP.

Examples of SUP in Sentences

Here are examples of SUP being used in conversations:

An Academic Look at SUP

When used with the meanings "What's Up?" and "Stand-Up Paddleboarding," SUP is an acronym (i.e., an abbreviation spoken like a word). In the case of "What's Up?." It is also a contraction of the interrogative sentence "What is up?". It commonly stands alone and is not usually followed by a question mark. (It is also a contraction when used with the meaning "Support.")

When used to mean "Drink," SUP is classed as slang. Slang refers to words, phrases and uses of language that are regarded as very informal and which are often restricted to a special context or a particular group of users.

Before the digital era, we might have said something like "Hello" or "What's happening?" instead of using SUP with the meaning "What's Up?."

Example of SUP Used in a Text