What Does TEOTWAWKI Mean?

TEOTWAWKI means "The End of the World As We Know It."

The abbreviation TEOTWAWKI is primarily used to refer to the failure of existing institutions and norms of society, usually caused by a catastrophic event, such as a nuclear war or global disaster.

TEOTWAWKI is a popular subject in online discussions between members of survivalist groups. However, it is also used ironically, sarcastically or with deliberate hyperbole to refer to all sorts of events, the actual impact of which on the world is clearly not so devastating.

Of note, TEOTWAWKI is often typed as EOTWAWKI ("End of the World As We Know It").

When I write TEOTWAWKI, I mean this: 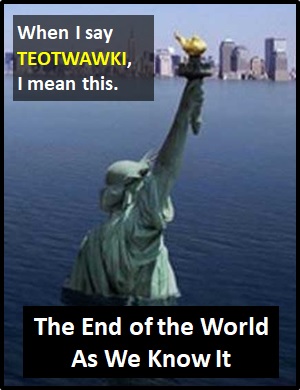 Examples of TEOTWAWKI in Sentences

Here are examples of TEOTWAWKI being used in conversations:

An Academic Look at TEOTWAWKI

As it is pronounced using its individual letters (i.e., "Tee Ee Oh Tee Dblyoo Ay Dblyoo Kay Eye"), TEOTWAWKI is classified as an initialism abbreviation. Initialisms are different to acronyms, which are spoken like words.

Before the digital era, we would have just said "The End of the World As We Know It" instead of using the abbreviation TEOTWAWKI.

Example of TEOTWAWKI Used in a Text