What Does TGI Mean?

The abbreviation TGI is used with the meaning "Thank God It's […]!" as an exclamation of relief or delight. TGI probably originated in 1965, when the first T.G.I. Friday restaurant opened in New York. Since then TGI has been widely used, both in speech and in text-based conversation. For example:

Since 2010, some television commercials for T.G.I Friday restaurants have made use of the alternative phrase, "Thank Goodness It's Friday." This definition of TGI is preferred by those who would rather not use the word "God" as an exclamation.

Other abbreviations used to express relief or delight include:

When I write TGI, I mean this: 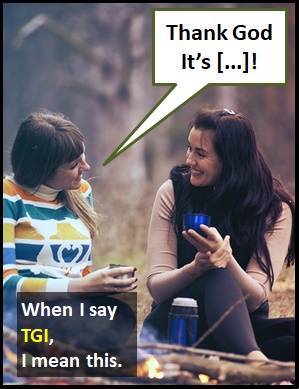 Examples of TGI in Sentences

Here are examples of TGI being used in conversations:

An Academic Look at TGI

As it is pronounced using its individual letters (i.e.,"Tee Gee Eye"), TGI is classified as an initialism abbreviation. Initialisms are different to acronyms, which are spoken like words.

Example of TGI Used in a Text