TMBI means "Tell Me 'Bout It."

The abbreviation TMBI is used with the meaning "Tell Me 'Bout It" (i.e., "Tell me about it") as an ironic response to something that has been said. Although TMBI could be a genuine invitation to talk more about a subject, it is more commonly used to display empathy and understanding when someone is sharing a funny anecdote or moaning.

"Tell Me 'Bout It" is also abbreviated as TMAI (Tell Me About It). Other abbreviations with similar meanings include:

When I write TMBI, I mean this: 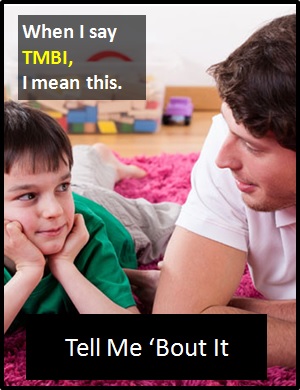 Examples of TMBI in Sentences

Here are examples of TMBI being used in conversations:

An Academic Look at TMBI

TMBI is an imperative phrase (i.e., an order). As it is pronounced using its individual letters (i.e., "Tee Emm Bee Eye"), it is classified as an initialism abbreviation. Initialisms are different to acronyms, which are spoken like words.

Before the digital era, we might have just said "Tell Me 'Bout It," or something like "I know what you mean" instead of using the abbreviation TMBI.

Example of TMBI Used in a Text