TMTS means "Too Much Too Soon." The abbreviation TMTS is used with the meaning "Too Much Too Soon" to refer to an excess of something in a short space of time. TMTS is probably most often used when referring to a party in a relationship who is pushing for commitment at a very early stage, or to a celebrity who finds sudden fame difficult to deal with.

An example of a celebrity struggling with fame was portrayed in the 1958 Hollywood Film "Too Much Too Soon," starring Errol Flynn. The film was billed as a biopic of actress Diana Barrymore, who briefly flirted with fame before falling apart.

In the musical sphere, "Too Much, Too Soon" was the name of the second album by The New York Dolls (1974) and was also the name of a song released by Green Day (2004).

When I write TMTS, I mean this: 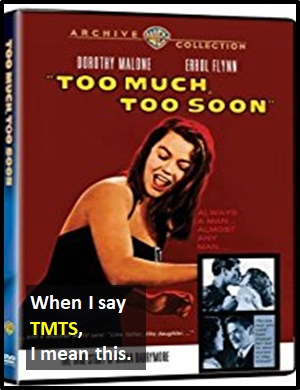 "Too Much Too Soon" is a movie starring Errol Flynn.

Examples of TMTS in Sentences

Here are examples of TMTS being used in conversations:

An Academic Look at TMTS

As it is pronounced using its individual letters (i.e., "Tee Em Tee Es"), TMTS is classified as an initialism abbreviation. Initialisms are different to acronyms, which are spoken like words.

TMTS is typically used as a standalone declarative sentence (i.e., a statement). It is not normally used as part of speech within a wider sentence.

Before the digital era, we might have just said "Too Much, Too Soon" instead of using TMTS.

Example of TMTS Used in a Text