TWANK means "Thank Someone on Twitter." It is often seen in the form "Twanking." For example: TWANK is classified as a portmanteau word, which is word made up of two other words (in this case, Twitter and thank). When spoken, the word TWANK often causes listeners to raise an eyebrow because it sounds similar to the lewd word wank. This has undoubtedly contributed to the popularity of TWANK and TWANKING. It also influences how the word is used. For example:

When I write TWANK, I mean this: 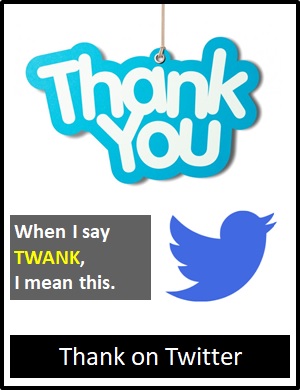 Examples of TWANK in Sentences

Here is example of TWANK being used in a conversation:

An Academic Look at TWANK

TWANK is a verb. It is often seen the form TWANKING, when it is a gerund or a present participle. For example:

(Here, it is a participle used to form a verb tense.)

Example of TWANK Used in a Text

TWANK
Help Us To Improve Cyber Definitions
Please tell us using this form.