What Does VGL Mean?

VGL means "Very Good Looking." The abbreviation VGL is typically used in dating profiles, normally as part of a self description posted by a user. However, it can also be used to describe someone else, either as part of the description of someone that a user is hoping to date, or in general text-based chat.

It is widely believed that anyone who uses VGL as part of their dating profile and who doesn't post a picture, is probably lying and is not really good looking at all.

VGL means "Very Good Looking." This is the most common definition for VGL on online dating sites, such as Craigslist, Tinder, Zoosk and Match.com, as well as in texts and on adult chat forums.

When I write VGL, I mean this: 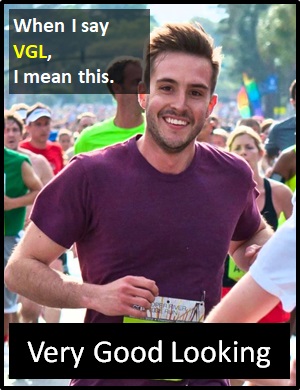 A photo of a "Ridiculously photogenic guy," which was widely circulated online in 2012.

Examples of VGL in Sentences

Here are examples of VGL being used in conversations:

An Academic Look at VGL

As it is pronounced using its individual letters (i.e., "Vee Gee El"), VGL is classified as an initialism abbreviation. Initialisms are different to acronyms, which are spoken like words.

Example of VGL Used in a Text

VGL
Help Us To Improve Cyber Definitions
Please tell us using this form.