What Does VLOGGER Mean?

Vlogger means "Video Blogger." Video blogs are a form of online television which are increasingly common on sites such as Youtube.

Vloggers are people who regularly publish video blogs. (NB: Popular vloggers can make a living from this, making "vlogger" a bonafide profession.)

Some vloggers are also bloggers and embed their videos among text on a blog or website. Some vloggers use video as a form of online diary, while others give advice or information. For example, a food vlogger might film a recipe, and a beauty vlogger would share make-up tips.

When I write VLOGGER, I mean this: 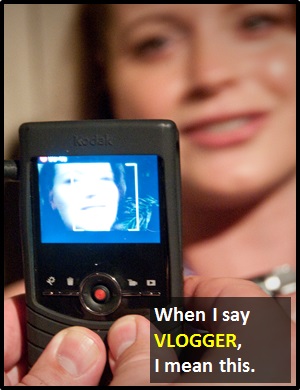 The image shows a woman being filmed on a small video camera.

Examples of VLOGGER in Sentences

Here are examples of VLOGGER being used in conversations:

An Academic Look at VLOGGER

As it is formed by merging two words into one, Vlogger is classified as a portmanteau word. It is formed by amalgamating video and blog.

Example of VLOGGER Used in a Text

VLOGGER
Help Us To Improve Cyber Definitions
Please tell us using this form.