What Does U2B Mean?

Of note, YouTube was created in 2005 by Chad Hurley, Steve Chen, and Jawed Karim, who knew each other from their days with the then start-up, Paypal. YouTube (or U2B) is the world's most popular website. Visitors to YouTube watch over 4 billion hours' worth of videos each month.

When I write U2B, I mean this: 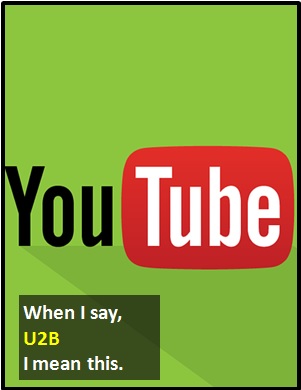 Examples of U2B in Sentences

Here are examples of U2B being used in conversations:

An Academic Look at U2B

U2B is typically used as a noun (i.e., a naming word) because it is the name of the video-sharing site. For example:

Example of U2B Used in a Text

U2B
Help Us To Improve Cyber Definitions
Please tell us using this form.