What Does WILCO Mean?

WILCO means "Will Comply." The abbreviation WILCO is used to show you have understood a request or an order and will comply with the instructions. WILCO is a shortened version of “Roger, Wilco”, which took its rise from military communications in World War 2. “Roger” was the US military word for the letter R, which was used to say “received”.

WILCO is also the name of an American alternative rock band, based in Chicago. Some of the tracks from their “Sky Blue Sky” album were used in advertisements around 2007 for VW cars.

When I write WILCO, I mean this: 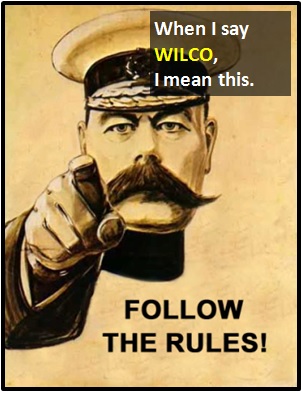 WILCO means you will comply with an order.

Examples of WILCO in Sentences

Here are examples of WILCO being used in conversations:

An Academic Look at WILCO

WILCO can also be used as an exclamation, where it is not part of a longer sentence (e.g., the response to "Be there at 8pm" could be "WILCO").

Example of WILCO Used in a Text