What Does WUM Mean?

A "Wind-Up Merchant" (or WUMMER) is a joker or prankster who enjoys teasing other people or playing tricks on them.

A WUMMER usually regards their WUMMING as fun. However, the teasing can sometimes be malicious and is almost always irritating for the person being WUMMED. For example: WUMMING done online (e.g., in chat rooms or comments sections of newspaper articles) is more typically referred to as TROLLING.

The term "Wind-Up Merchant" is thought to be based on the action of winding up a clock or other clockwork device to get it going.

When I write WUM, I mean this: 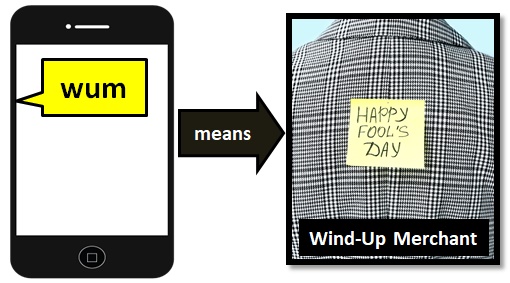 A wind-up merchant is a joker or prankster.

An Academic Look at WUM

WUM is typically used as a noun (i.e., a naming word). However, WUM can also be used to form a verb (a doing word) and a gerund (a noun formed from a verb). For example:

(Here, WUM is being used as a gerund and a verb.)

Example of WUM Used in a Text