What Does X Mean?

X means "Kiss" and can also mean "Variable" (in Math).

The letter X is widely used at the end of text messages and emails to signify a kiss. It can be typed in either uppercase (X) or lowercase (x) without significantly altering its meaning. However, uppercase may sometimes be used to provide emphasis (i.e., to signify a big kiss).

Here is a table showing the possible meanings of Xs at the end of a message:

A "variable" doesn't have to be indicated by the letter X. It could be any other letter, word or symbol.

When I write X, I mean this: 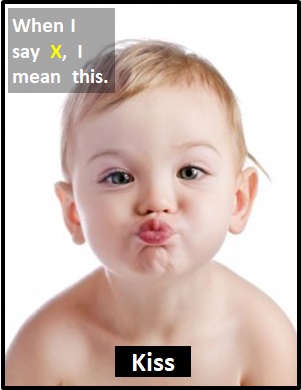 X is also used in math to indicate a "variable."

"Variable" is common definition for X in math.

Examples of X in Sentences

Here are examples of X being used in conversations:

An Academic Look at X

In the Middle Ages, most people were illiterate and could only write the letter X. As a result, many people signed letters and sealed envelopes with an X, which they then kissed as a sign of faith and honesty. It is generally accepted that this X represented the Christian cross. However, it is also thought that the X may have represented the name of Jesus Christ, deriving from "ΧΡΙΣΤΟΣ" (which is the Greek word for Christ).

The use of the letter X to represent a kiss long pre-dates the digital era.

Example of X Used in a Text