What Does XGF Mean?

The abbreviation XGF means "Ex-Girlfriend ." It is used to refer to any female with whom there was previously a romantic relationship.

XGF doesn't actually say anything about the current status of the relationship (i.e., an XGF may now be a good friend, a sworn enemy or (as in the famous words of Gotye), just "Somebody That I Used To Know!". For example: XGF is an extension of the abbreviation GF ("Girlfriend").

If your ex is male you will need XBF ("Ex-Boyfriend").

Gotye - Somebody That I Used To Know (feat. Kimbra) [Official Music Video]

When I write XGF, I mean this: 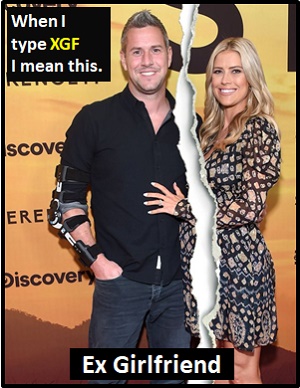 An XGF may still be a friend.

An Academic Look at XGF

The letter "x" is a common abbreviation of the word "ex." XGF is still considered an initialism abbreviation, i.e., an abbreviation pronounced using its individual letters. (In this case "Ex Gee Eff").

Example of XGF Used in a Text