Discord is a popular communications tools for online gaming and streaming. Often called "Skype for gamers," Discord allows players to chat live as well as share texts, pictures, videos, and audio clips. The Discord app is compatible with desktops and mobiles. The app provides a chat lobby, a message board, and (Voice Over Internet Protocol) VoIP chat. (Although Discord can be run through a web browser, the app gives far more functionality and customization options, making it essential for anyone running a server.)

You can get started on Discord in one of the following ways: One great feature of the desktop Discord app is that it can be accessed via an overlay, meaning that messages or audio adjustments can be carried out without interrupting game play. Also of note, neither the browser version nor the mobile version supports the screen-share function that allows users to stream their desktops to other players. For this, you will require the desktop Discord app. (Discord is compatible with Windows and Mac computers as well as Android and iOS.)

Discord is particularly good at managing large groups. With a Discord server, you can create separate channels with different levels of permissions for users, meaning that groups remained focussed as opposed to being in one mass message thread or voice-chat channel. (This is particularly useful because some servers can house over 100,000 users. Typically, these large groups are for users of games like PlayerUnknown's Battlegrounds (PUBG) and Minecraft. )

Discord Nitro is the paid version of Discord, offering the following additional functionality:

Discord has a listing of officially endorsed community-management and server-management tools that are third-party programs. These are called Discord bots. Typically, the bots provide server owners with moderation tools and allow integration with other apps (e.g., YouTube or Twitch). There are also unofficial Discord bots (some free and some paid) that provide useful functionality, such as making phone calls and displaying players' career statistics for games like Fortnite.

When I write Discord, I mean this: 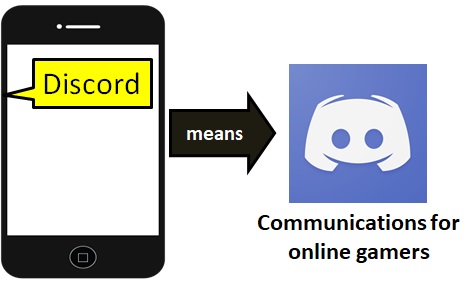 Discord is often described as "Skype for gamers."

Example of Discord Used in a Text

discord
Help Us To Improve Cyber Definitions
Please tell us using this form.