What Does GG Mean?

The abbreviation GG is used with a number of meanings, including "Good Game," "Game and Giving," "Genetic Girl," and "Horse." Here is more information about each of these definitions of GG.

The abbreviation GG is often used with the meaning "Good Game." In gaming, GG is typically used at the end of a contest to congratulate the other player for an enjoyable game. It is particularly common on Discord, (a communications app popular with gamers) and means the same as GGWP (Good Game, Well Played).

GG is also used to mean "Good Game" outside the gaming arena (e.g., on messaging apps such as Whatapp and Instagram). In this context, it is typically used as an acknowledgment that a round of banter has played out well.

In a sexual context or on dating sites, GG means "Game and Giving." However, it is more commonly seen in the form GGG, meaning "Good, Giving, and Game" (i.e., a high quality, willing, and selfless sexual partner).

In the LGBT community, GG is used with the meaning "Genetic Girl" to refer to a cisgender woman (as opposed to a trans gender woman or one who cross dresses.

GG can also be used to refer to a horse. Pronounced "gee-gee," it is a term used by adults when speaking to young children.

Here's a short video explaining this entry on the four most common meanings for GG: We're working hard to create more video summaries on new terms as they arise. Please follow us on Youtube.

When I write GG, I mean this: 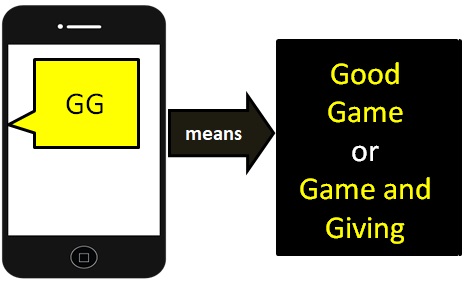 "Game and Giving" is another definition for GG.

In the LGBT community, GG is often used with the meaning "Genetic Girl."

Examples of GG in Sentences

Here are examples of GG being used in conversations:

(Here, GG means "Good Game." Be mindful that GG can be patronizing, so use with caution.)

An Academic Look at GG

As it is pronounced using its individual letters (i.e., "Gee Gee"), GG is classified as an initialism abbreviation. Initialisms are different to acronyms, which are spoken like words.

Example of GG Used in a Text