What Does ADAD Mean?

ADAD is now generally held to be a weary comment on the routine toil to earn a living or a simple statement that the day is as unremarkable as any other day. However, some people contend that ADAD is an optimistic greeting, reflecting the fact that today is a new day with new opportunities.

When I write ADAD, I mean this: 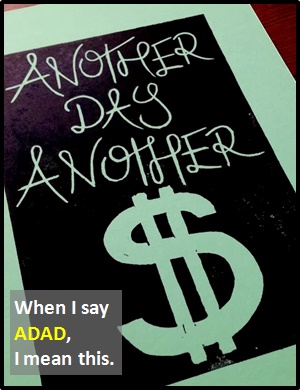 Examples of ADAD in Sentences

Here are examples of ADAD being used in conversations:

An Academic Look at ADAD

As it is pronounced using its individual letters (i.e., "Ay Dee Ay Dee"), ADAD is classified as an initialism abbreviation. Initialisms are different to acronyms, which are spoken like words.

ADAD is used as a standalone declarative sentence (i.e., a statement). In other words, it is not used as another part of speech within a wider sentence.

Before the digital era, we would have just said "Another Day Another Dollar" instead of using the abbreviation ADAD.

Example of ADAD Used in a Text