What Does OAN Mean?

OAN means "One America News" and "On Another Note."

The abbreviation OAN has a number of meanings including "One America News" and "On Another Note." Here is more information about each of these definitions of OAN. Examples of use can be found below.

The abbreviation OAN is widely used to refer to the "One America News Network" (formally abbreviated as OANN.)

OAN is used with the meaning "On Another Note" to introduce a change of subject. OAN is often employed as part of the normal flow of conversation, but can also be used when the sender feels uncomfortable with where the conversation is going or doesn't want to answer a question.

In public speaking, the use of phrases such as "On Another Note," or "On a different note," is known as "signposting." It helps to avoid confusion in the audience, by clearly indicating a change in topic.

The phrase "On Another Note" probably originated in music, where a different key may completely change the sound of a piece of music.

When I write OAN, I mean this: 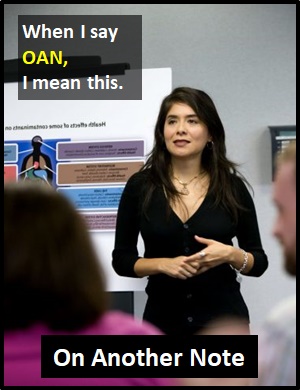 "On Another Note" is another common definition for OAN.

Examples of OAN in Sentences

Here are examples of OAN being used in conversations:


(Here, OAN is being used to mean both "One America News" and "On Another Note.")

An Academic Look at OAN

Whether used with the meaning "One America News" or "On Another Note," OAN is classified as an initialism abbreviation, because it is pronounced using its individual letters (i.e., "Oh Ay Enn").

"On Another Note" is an idiom; i.e., a commonly used expression whose meaning does not relate to the literal meaning of its words. Here are some other common idioms:

Example of OAN Used in a Text