Here is more information about each of these definitions of BBB, with examples of use.

BBB is often used with the meaning "Bored Beyond Belief," to indicate that someone is extremely bored. In this context, BBB is typically used in response to a question from a friend or close colleague. The use of BBB implies that the sender has no way of getting out of the activity that is causing their boredom (e.g., they may be at work or are obliged to participate in something that they would really rather not do). For example:

When used with the meaning "Bugging Beyond Belief," BBB indicates that the sender is being really annoyed by someone or something. For example:

The phrase "Bullsh*t Baffles Brains" is widely used to refer to the phenomena that many people, including otherwise intelligent people, can often be convinced to agree to nonsensical ideas. The theory is that, by sounding authoritative and using flattery or jargon, it is possible to convince almost anyone of anything. For example:

The "Better Business Bureau" is a non-profit organization which represents over 100 independently incorporated local business organizations in the US and Canada.

When I write BBB, I mean this: 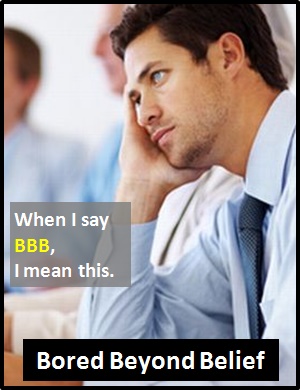 "Bugging Beyond Belief" is another common definition for BBB.

"Bullsh*t Baffles Brains" is another definition for BBB.

"Better Business Bureau" is another common definition for BBB used in business circles.

An Academic Look at BBB

As it is pronounced using its individual letters (i.e., "Bee Bee Bee"), BBB is classified as an initialism abbreviation. Initialisms are different to acronyms, which are abbreviations spoken like words (e.g., GOAT, NATO).

Before the digital era, we might have said something like "I'm bored!" or "I am so bored!" instead of using the abbreviation BBB with the meaning "Bored Beyond Belief."

Example of BBB Used in a Text