What Does BBT Mean?

BBT means "Be Back Tomorrow" and "Basal Body Temperature."

BBT is typically used in online and text-based communications to mean "Be Back Tomorrow." It announces that the participant will be away until the following day.

BBT also means "Basal Body Temperature," which is the temperature of the body at rest as measured in the morning. BBT is often used by women wishing to get pregnant to help with predicting the moment of maximum fertility.

When I write BBT, I mean this: 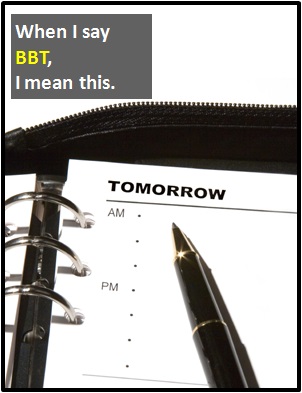 BBT means "Be Back Tomorrow."

Examples of BBT in Sentences

Here are examples of BBT being used in conversations:

An Academic Look at BBT

BBT is an initialism abbreviation. Technically, this means it is pronounced using its individual letters (i.e., Bee Bee Tee), but as this is harder to say than "Be Back Tomorrow" it is not often uttered using its letters. In other words, the abbreviation BBT is for efficiency in writing and not efficiency in speech.

Intialisms contrast with acronyms, which are spoken like words.

Before the digital era, we would have just said something like "see you tomorrow" instead of using the abbreviation BBT.

Example of BBT Used in a Text