What Does CUT Mean?

When I write CUT, I mean this: 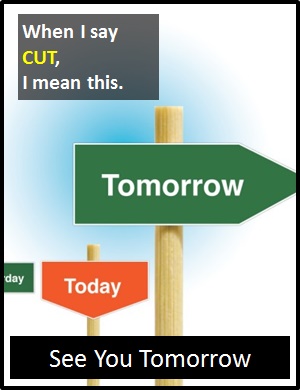 What Does CUT Mean?

CUT means "See You Tomorrow." The abbreviation CUT is normally used at the end of a conversation and usually implies that the participants will definitely be meeting the following day, either online or in person. However, it could also be used as a question, to confirm the arrangements for the next meeting.

Of note, CUT can also be written as “CYT”, “SUT” and “SYT". The abbreviation CUT can also mean "See You There."

Examples of CUT in Sentences

Here are examples of CUT being used in conversations:

An Academic Look at CUT

CUT is an initialism abbreviation. Technically, this means it is pronounced using its individual letters (i.e., See Yoo Tee). Whilst it would seem more convenient to use CUT in spoken conversation, it is not normally used as such as it is likely to cause confusion. The abbreviation CUT is for efficiency in writing and not efficiency in speech.

The abbreviation CUT is normally used as a standalone declarative sentence (i.e., a statement) with the meaning "See You Tomorrow”. CUT is not often used as another part of speech within a wider sentence.

Before the digital era, we would have just said "See you tomorrow" instead of CUT.

Example of CUT Used in a Text