Of note, there is a debate over the meaning of BFFE. The alternative suggestion, which is growing in popularity, is "Best F*cking Friend Ever."

When I write BFFE, I mean this: 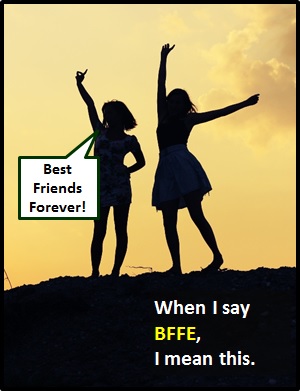 BFFE is an alternative for BFF (Best Friends Forever).

Examples of BFFE in Sentences

Here are examples of BFFE being used in conversations:

An Academic Look at BFFE

BFFE is an initialism abbreviation. This means it is pronounced using its individual letters (i.e., Bee Eff Eff Ee). (Initialisms contrast with acronyms, which are spoken like words.)

BFFE is used as a noun. When the term is expanded, it is a noun phrase headed by the common noun Friends. (The words Best and Forever modify Friends.)

Example of BFFE Used in a Text