What Does BTK Mean?

BTK means "Back To Keyboard." The abbreviation BTK is typically used in computer-based conversations (such as chat forums and multi-player games) to mean "Back To Keyboard." In this context, BTK indicates that a participant who had been away from their computer or console for a brief period has now returned.

Of note, BTK, with the meaning "Bind, Torture, Kill," was also the signature used by serial killer Dennis Rader in his letters to police and news outlets. Rader murdered ten people in Sedgwick County, Kansas, between 1974 and 1991.

"Bind, Torture Kill" was the title of a song released in 2006 by the American death metal band Suffocation. The story of Rader was detailed in the 2007 book " Bind, Torture, Kill: The Inside Story of the Serial Killer Next Door."

When I write BTK, I mean this: 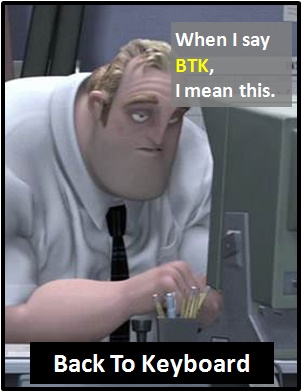 BTK can mean "Bind, Torture, Kill," but usually means "Back To Keyboard."

Examples of BTK in Sentences

Here are examples of BTK being used in a conversation with the meaning "Back To Keyboard":

An Academic Look at BTK

BTK is used as a standalone declarative sentence (i.e., a statement), with the meaning "I am now back at the keyboard." In other words, it is not used as another part of speech within a wider sentence.

Of note, BTK is an initialism abbreviation. This means it is pronounced using its individual letters (i.e., Bee Tee Kay). Initialisms contrast with acronyms, which are spoken like words.

Example of BTK Used in a Text