What Does DLAM Mean?

DLAM means "Don't Laugh at Me." The abbreviation DLAM is commonly used as a way of asking people to refrain from ridiculing or making fun of you. You could respond with DLAM if you were mocked for something you'd said or done.

DLAM should not be confused with DMML, meaning "Don't Make Me Laugh," an informal response to someone who is clearly deluded. For example, if someone said to an Olympic sprinter: "I could beat you easily in a 100 metre race" one response could be: "Don't make me laugh" (i.e., don't be ridiculous. That cannot be true).

When I write DLAM, I mean this: 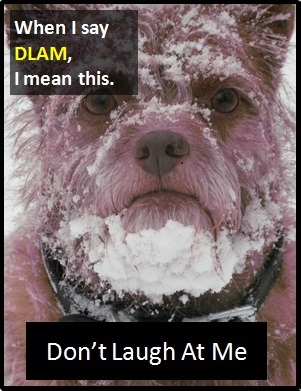 DLAM is a way to ask someone not to make fun of you.

Examples of DLAM in Sentences

Here are examples of DLAM being used in conversations:

An Academic Look at DLAM

DLAM is an initialism abbreviation. This means it is pronounced using its individual letters (i.e., Dee Ell Aay Em), but as this is harder to say than "Don't laugh at me," it is not often spoken using its letters. In other words, the abbreviation DLAM is for efficiency in writing and not efficiency in speech.

Example of DLAM Used in a Text

IAL (I Ain't Laughing) LAU (Laughing At You) LLZ (Laugh Out Loud (with sarcasm)) LUL (Lame Uncomfortable Laugh) LWM (Laugh With Me) TROLOL (Laughing At Somebody Who Is Trolling) HHVF (Ha Ha Very Funny) JOANING (Making Fun Of Someone) LOLN (Lol, Not (i.e. it's not funny)) NFAA (Not Funny At All) RIB (Make Fun Of ) SNF (So Not Funny) SNIDE (Making Fun Of)