What Does DNA Mean?

DNA means "Deoxyribonucleic Acid." The abbreviation DNA stands for "deoxyribonucleic acid," which is the biological instructions that make every species unique. DNA is inherited from parents – half from the mother, and half from the father - and determines everything from eye colour to immune system.

DNA was first used in 1986 in the criminal prosecution of a 17-year-old alleged rapist. The tests proved the teenager was in fact not the perpetrator and the actual attacker was eventually caught, also using DNA testing.

The abbreviation DNA can also mean "Does Not Apply," meaning something is not applicable. For example, if a document asks for a spouse's name, but you are single, you would write DNA, sometimes written as N/A meaning "Not Applicable."

DNA can also mean "Did Not Attend," which states that someone was not present at an event.

When I write DNA, I mean this: 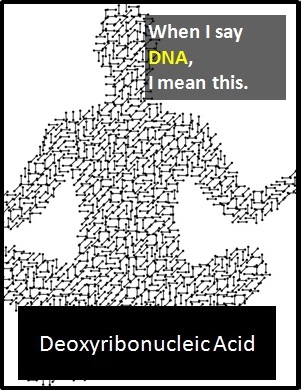 Examples of DNA in Sentences

Here are examples of DNA being used in conversations:

An Academic Look at DNA

As it is pronounced using its individual letters (i.e., "Dee Enn Aay"), DNA is classified as an initialism abbreviation. Initialisms are different to acronyms, which are spoken like words

Example of DNA Used in a Text