What Does ENTANGLEMENT Mean?

The word ENTANGLEMENT is often used euphemistically to refer to an extramarital affair or any other sort of relationship that involves cheating on a romantic partner. For example: The term ENTANGLEMENT in this context was popularized by the the much publicized break-up between actor Will Smith and his wife Jada Pinkett Smith, when Jada publicly admitted to an ENTANGLEMENT with rapper August Alsina.

Jada Pinkett Smith Admits to an Entanglement with August Alsina

When I write ENTANGLEMENT, I mean this: 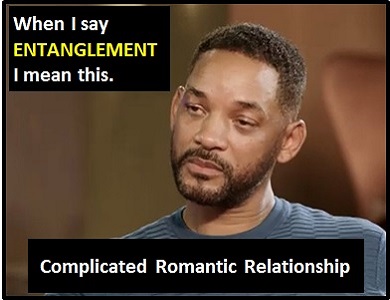 Will Smith suffered as a result of Jada Pinkett Smith's "entanglement."

An Academic Look at ENTANGLEMENT

When used to refer to a complicated romantic relationship, ENTANGLEMENT is a euphemism, i.e., an agreeable or inoffensive word used to replace a rude or offensive one.

Euphemisms are a type of figurative language, typically used to lessen the impact of bad news or to make discussions around difficult topics easier. They are often used in politics, business, and uncomfortable discussions (e.g., discussions about death, sex, and (of course) relationships).

Example of ENTANGLEMENT Used in a Text