What Does SHIP Mean?

The term SHIP is popular in fanfiction circles and refers to a (usually romantic) relationship between characters in a book, film, TV series, manga, or anime.

In this context, SHIP is a noun. However, SHIP is also often used as a verb, when it means to endorse a relationship. Usually, the SHIP in question is not canon in the original story, but is promoted or endorsed by fans. Such SHIPs include those between Mulder and Scully in the X-Files TV series, and between Harry and Hermione in The Harry Potter stories.

When I write SHIP, I mean this: 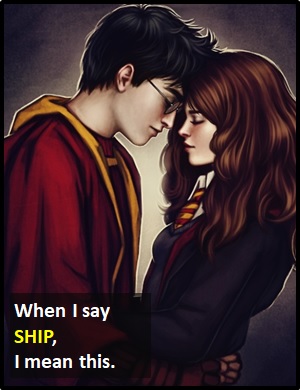 Hermione and Harry were never a couple.

Examples of SHIP in Sentences

Here are examples of SHIP being used in conversations:

An Academic Look at SHIP

SHIP is a shortened version of relationship and is therefore a contraction. Contractions tend to be formed in one of three ways: For reasons of brevity, contractions are rarely followed by periods/full stops and apostrophes are routinely omitted in text speak and on social-media platforms.

Example of SHIP Used in a Text