EXTRA means "Extremely Over The Top."

The term EXTRA is a slang word, typically used to describe a person who behaves in an excessively dramatic (i.e., "Over-The-Top") way.

The use of the term EXTRA to describe an over-the-top person or behavior has been common since at least the early 2000s. However, it became really popular around 2015.

EXTRA usually carries negative connotations and implies that a person's actions are too dramatic or over the top. However, the term is also sometimes used to describe dramatic behavior that is considered amusing or entertaining. One of the most famous examples of someone being acceptably EXTRA is the Turkish Chef Nusret Gökçe, (AKA "Salt Bae"). In 2017, he became a worldwide celebrity when he was featured in a viral video sprinkling salt onto food in an extremely over-the-top manner.

When I write EXTRA, I mean this: 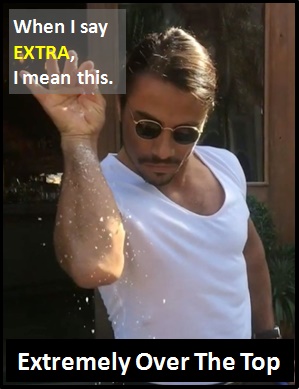 Examples of EXTRA in Sentences

Here are examples of EXTRA being used in conversations:

An Academic Look at EXTRA

EXTRA is a slang word. Slang refers to words, phrases and uses of language that are regarded as very informal and which are often restricted to a special context or a particular group of users.

EXTRA is typically used as an adjective (i.e., a describing word). For example:


(Here, the adjective EXTRA modifies the noun they.)

Example of EXTRA Used in a Text

EXTRA
Help Us To Improve Cyber Definitions
Please tell us using this form.