What Does F9 Mean?

F9 means "Fine," "Promiscuous," and "Get Rid." Here is more information about each of these definitions of F9, with examples of use.

F9 is used as an abbreviation of the word "fine", which means "great" and "okay."

When said out loud together, the letter f and the number 9 sound like the word "fine."

F9 is also used to refer to someone who is promiscuous (i.e., moves quickly from one relationship to the next) or to suggest getting rid of a partner. For example: This usage of F9 comes from the website chatroulette.com, where pressing the F9 button moves the user on to the next person. 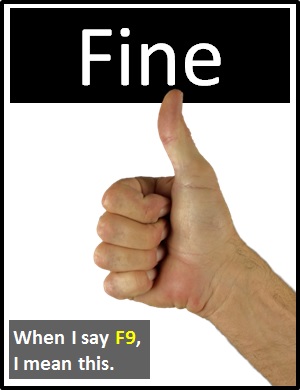 Summary of Key Points for the First Definition of F9

"Promiscuous" is another definition for F9.

An Academic Look at F9

F9 is defined as a cyber term because some of its characters are used as substitutes for letters.

Most cyber terms were introduced to reduce the number of key strokes required to write the word, but since the arrival of predictive texting and keyboards on mobile devices, this efficiency is no longer required. Nevertheless, cyber terms are still regularly used to make messages more entertaining or to express individuality. Cyber terms differ from icons because they are not pictorial representations.

Before the digital era, we would have just said "fine" instead of using F9.

Example of F9 Used in a Text