What Does FINNA Mean?

FINNA is shorthand for "I am fixing to" or "I am going to." It is an amalgam of "fixing to" (which means "preparing to") and "gonna."

Although rare, FINNA can also be used to describe a person who consistently promises to do things but rarely does.

When I write FINNA, I mean this: 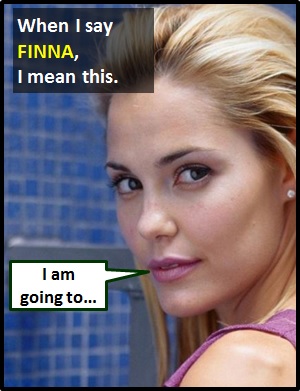 FINNA is an amalgam of fixing to and gonna.

"Going To or About To (probably from "I am fixing to")" is the most common definition for FINNA on Snapchat, WhatsApp, Facebook, Twitter, Instagram, and TikTok.

Examples of FINNA in Sentences

Here are examples of FINNA being used in conversations:

(Here, FINNA means a person who promises a lot but delivers little.)

An Academic Look at FINNA

FINNA best translates as "I am going to." As such, it is usually followed by the base form of an infinitive verb (i.e., without to).

(Here, drink is the base form of the verb to drink.)

When FINNA is used to describe a person, it is a common noun.

Example of FINNA Used in a Text