What Does IMMA Mean?

The fist three letters of the word IMMA represent a contraction of the phrase "I am" and the letter "A" on the end derives from the lest letter of the slang word "Gonna." Therefore, IMMA is a contraction of "I am going to." It is typically used to indicate that the sender is about to do something.

"I'm Going To" is more commonly abbreviated as IMA. IMMA is also used due to the following popular meme featuring SpongeBob SquarePants. 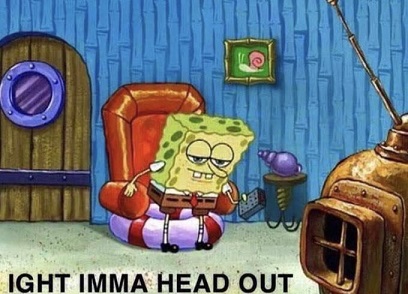 The meme's caption "ight imma head out" means "Right, I am going to head out." It is often posted on social media to show a desire to exit a conversation. It's similar in meaning to the phrase "Right, I'm outta here!" (NB: IGHT means "Right or Alright.")

When I write IMMA, I mean this: 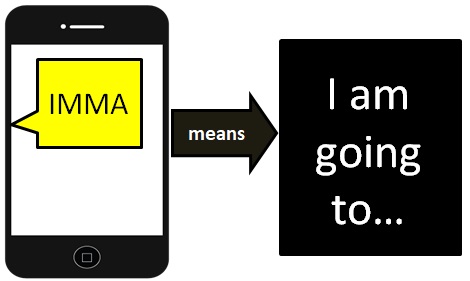 IMMA is typically used with a meme featuring Sponge Bob.

Examples of IMMA in Sentences

Here are examples of IMMA being used in conversations:

An Academic Look at IMMA

As a contraction of "I Am Going To," IMMA is classified as an abbreviation. It is most often followed by a bare infinitive not a to-infinitive. In other words, it usually appears in the form "IMMA fail my exams" rather than "IMMA to fail my exams."

Before the digital era, we would have just said something like "I'm Going To" instead of using IMMA.

Example of IMMA Used in a Text